Many people have told me since my arrival in Thailand that the culture shock upon returning to the United States will be more intense than the culture shock upon moving to Thailand. Though I have certainly experienced my fair share of culture shock since being here, I don’t doubt the likeliness of this prediction. Especially as a yogi, striving to practice mindfulness and to appreciate each present moment, the introduction to a more relaxed culture, despite the accompanying challenges, seems it will be much easier than the re-introduction to American culture.

The best way I’ve found to describe American culture can be summed up in one simple, everyday gesture – the way we introduce ourselves to others. After our name, the first question we ask others and are typically asked is, “What do you do?” We quite literally define ourselves by our jobs, of which only a few exceptionally fortunate Americans are lucky enough to love. And the immediate associations made when a job is identified? Financial resources, material ownership, background, education, status.

Not to mention the health consequences that come with a culture so focused on dedication to work and “success” – which we all too often forget is personally-defined. And when I say health consequences, of course I mean physical and mental, as an unhealthy balance between work and play can harm your relationships with others and with yourself.

Ego runs rampant in America, the most widespread undiagnosed disease to infect the overwhelming majority of a country. The “me, me, me”, materialistic, apathetic, no questions asked, self-important attitude people have – the same people who also always happen to be the victims.

Of course, labeling a culture as “right” or “wrong” is as arbitrary as it is impossible. The lens from which you see another culture may very well be entirely controlled by your own culture.

What I do know for sure is this: In the United States, I felt constant pressure. There’s a looming competitiveness to always be the best. “Burn out” has become the corporate expectation – we have glorified the worker who is so dedicated that they put work above their own sleep schedule. We have normalized relying on caffeine to get through the day and stripped work weeks of any form of celebration (sometimes our weekends, too, as we end up needing them just to catch up on sleep).

Is it really any wonder that anxiety and depression are common?

Before leaving the United States, my former employer told me that I was making a mistake and “choosing to run away from my problems”. He told me that in order to improve a situation, you must change yourself, not your environment – that my problems will follow me to Thailand regardless of my move. I understand this concept, and in many cases I have experienced the truth in this statement. I also recognize that no one and nothing else can ever truly hold blame for what you are feeling – at the end of the day, I am the only one who can control whether or not I feel pressured.

But to say that your environment has no impact on your happiness and wellbeing is ludicrous. On a smaller scale, the work environment I was enduring was completely unhealthy, not to mention how personally unfulfilled I felt in my field. With the exception of my yoga community, the town I was living in had nothing left to offer me other than the kinds of memories you’d like to avoid having in your face day after day. On a larger scale, it was becoming harder for me to deny that I needed a breath of fresh air away from the cultural environment in America.

At the same time, the obsession with image and appearance in Thailand is shocking. I thought the situation with social media and photo taking in America was bad – Maybe Thailand is only just beginning the selfie craze. Everything is about appearance here: makeup is a prized possession and beauty without makeup is an unheard of concept. Whiteness is held to a beauty standard that makes me uncomfortable. Almost all cosmetic products contain bleaching agents. But even worse than all this? Tonight, I met a young Thai woman, around my age, who told me that she is so excited for her consult in Bangkok next month with a plastic surgeon about her nose. Thai people believe that to have a beautiful face you need an Eastern-shaped nose – one with a higher bridge than many Asians have. When I told John about this woman, he said that he’s heard this many times before. It makes me sad to think about how beauty standards can be arbitrarily created by and ingrained into society – a result of years of systematic racism.

It’s about time I get off my soap box. All of this is to say that Thai culture overall celebrates life much more frequently and genuinely than my previous cultural environment.

In my last post, I mentioned Wai Khru Day, Thai Teacher Appreciation Day. The students spent hours crafting extremely intricate flower arrangements and decorations. Upon seeing the dome on the morning of Wai Khru Day, I would not be surprised if the students had stayed at school all night. Down the middle of the dome, the students had laid a beautiful red carpet – on either side, the walkway was framed with one unbelievably beautiful creation after the next. The crafts continued onto the stage, where the school’s higher-ups all sat. 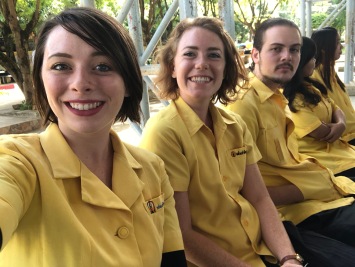 Sometimes, being a white foreign teacher at Lomkaophittayakhom can feel like you are being made into a puppet. It looks very impressive for the school to have foreign teachers from America teaching their English classes – it is a major selling point. LPK does not hesitate to take advantage of the PR opportunity – absolutely every time there is a celebration, we take so many photos with the director and staff that I might have permanent cheek damage after my time here. During this particular celebration, John, Jenn and I were instructed to walk down the carpet first without any instructions as to what we were meant to do at the end of the path – of course, leading the procession looks great with the photos, but not without some disorganization sprinkled in. We completed the line with confusion on our faces, only to look over and see Pee Pui at the side of the dome frantically directing us.

After the teachers paraded the red carpet, rows of teachers took turns joining the director on stage. Carrying even more gorgeous bouquets, the students walked to meet the teachers, single file, each stopping and kneeling before a teacher on the stage to present the offering. The level of respect and gratitude presented to teachers in Thailand is antonymic to that of America. Surprisingly, given our second identities as puppets, we were not brought to the stage. Even so, the rest of the students in the dome all had smaller bouquets which they presented to the teachers sitting on the sides of the arena. Absolutely all teachers received offerings and bows of gratitude. 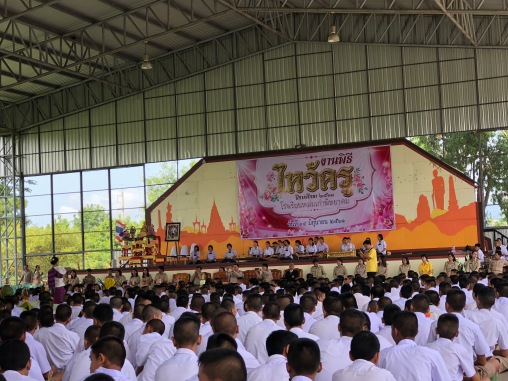 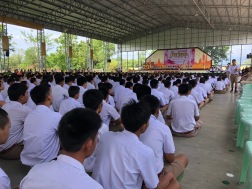 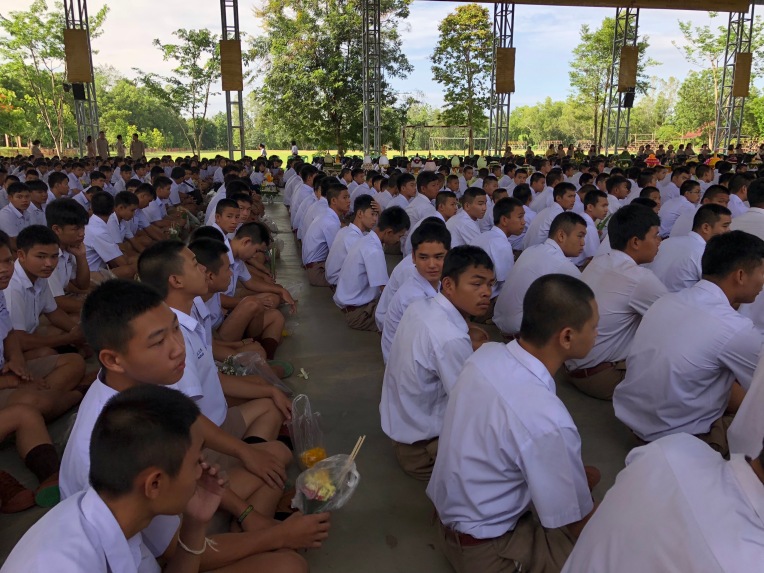 The week after Wai Khru Day, LKP had a full-day celebration in the dome that consisted of student performances and staff presentations, some of which encouraged students to say no to drugs. A group of students performed an impressive hip-hop dance, others showed off Tae Kwan Doe skills, and some played games of tako and basketball. Tako is an incredible game – fun to watch and to play, though I certainly need my practice. It’s similar to volleyball in rules and court, but you hit the lightweight ball with the side of your foot like you would a hacky sack. A student band also performed for the students, which lead to a dome-wide dance party!

In preparation of this celebration, Jenn, John and I were asked to dress in traditional Thai costume. When I say costume, I mean that we actually went to the drama and dance room at our school to retrieve costume wear, complete with itchy dress and heavy costume jewelry. I mistakenly assumed that the other teachers would also be dressing this way – thinking that we only needed to borrow from the drama room since we would not own any of our own. Jenn and I struggled to get dressed in the morning – arranging a Thai skirt, which is essentially a large sheet, with only one safety pin for each of us is no simple task. We walked as though we were wearing mermaid costumes all the way to the office as the skirts barely allowed us to move our legs. We griped about sexist Thai customs, seeing John’s loose fitting, comfortable pants. Jenn remarked, “I really hope we’re not the only ones wearing these,” followed by my optimistic, “There’s no way.” 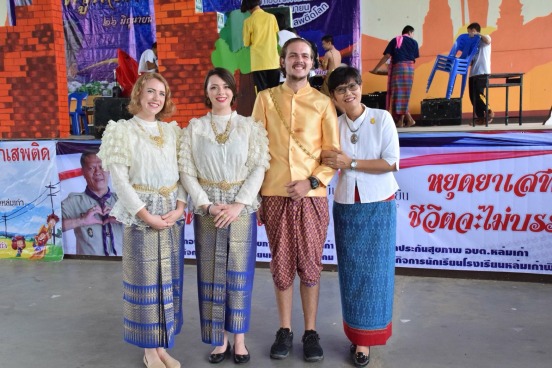 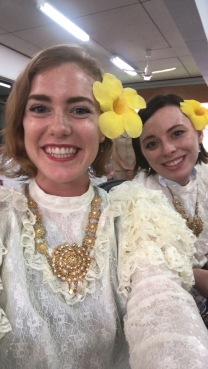 Indeed, there was a way. Many teachers were wearing Thai dress, but modern Thai dress, the kind that we all teach in every Friday (see photos below). We were perfectly costumed puppets for the photographs – of which there was no shortage. It made me feel better that many of my students approached me to tell me how beautiful I looked, and halfway through the day we were allowed to change back to normal teaching attire. I suspect this may have been a result of our obvious itching and ridiculous mermaid walk. 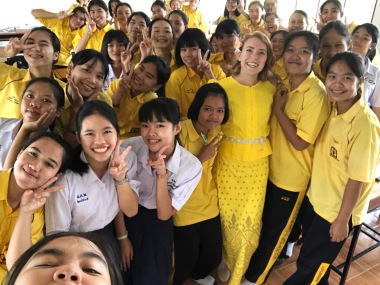 Does this day sound somewhat random and not exactly thematic to you? What a coincidence – we thought so too! Upon asking the other teachers why we were having this day of fun, we received quite the explanation:

-“Okay, but what about Thai language?”

These (sometimes seemingly pointless) celebrations can cause headaches – I’ve smiled through uncomfortable costumes and endless photo shoots and I have missed many classes that have thrown off my lesson plans. But it’s obvious that LKP values community so much that it’s okay to occasionally miss deadlines. My students work very hard, but it’s not the end of the world if schedules aren’t perfect one hundred percent of the time.

I remember feeling so pressured to be on my A game 24/7 in high school that I barely took a moment to appreciate it – before I knew it, I was graduating. My students have the chance to enjoy themselves, to celebrate the fun extracurriculars they love to get involved in outside the classroom, to bond with their classmates. Having the opportunity to be a part of this joy is wonderful.

The other day, Jenn turned to me and said, “Do you think this is the least amount of stress you’ve ever experienced?”

Yes, I do. Maybe not ever, but without a doubt, it is the least amount of stress I have experienced for as long as I can remember. With its relaxed, happy culture, Thailand is exactly where I want and need to be right now. I’m soaking it allll in.