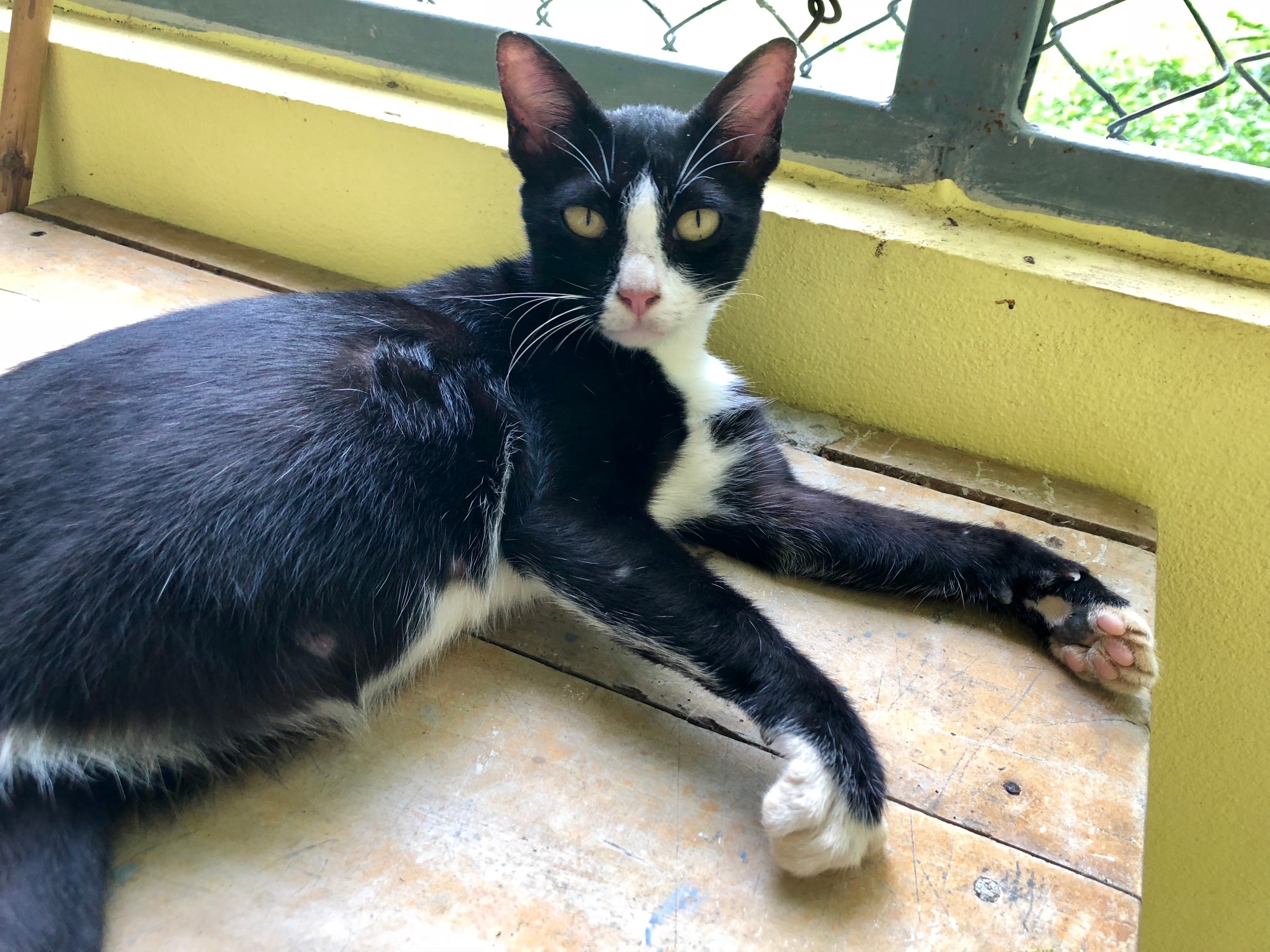 Huge news: the used motorbike search has officially concluded! Meaning we no longer feel as though we are trapped on campus! Suddenly, freedom has been restored! We can drive to the grocery store and to restaurants other than Ben’s! Our tongues will sing with palette variety!

Pee Pui, our coordinator and coworker, helped us find used bikes at a fraction of the cost of new bikes. With her insight, we decided it would be far more economical to purchase a used bike upfront than to rent a more expensive new bike and risk the associated impending costs that tend to sneak up on you, similarly to leasing a vehicle. Our work permits are not yet finalized, which would typically prevent us from purchasing the bikes, but Pee Pui was kind enough to put the purchase in her own name until our permits are finalized.

Both bikes are Yamaha’s: Mine is small and black while Jenn’s is pink and white and a little bit bigger. Her bike is also able to go faster than mine, but since we don’t plan on driving faster than 60km tops, this won’t be an issue. Helmets were included with our purchase as well as a short limited warranty, which, of course, I have already used. My headlight was dead the very next day after we purchased the bikes, and my bike was leaking gasoline. This was excellent timing considering I had just filled my tank, but the shop owners were nice enough to come out to the school to retrieve the bike, fix it, and promptly return it. 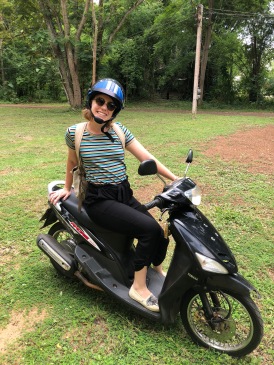 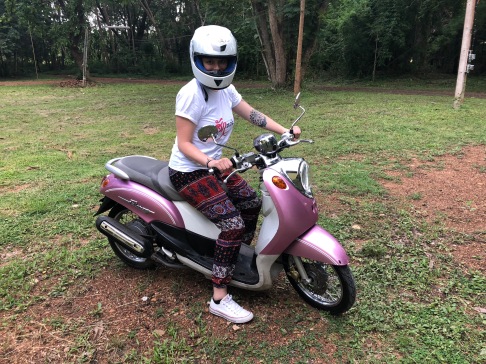 Jenn upgraded her helmet from the free one to a more secure and protective helmet she found at Tesco. I will upgrade mine soon as well.

I have to admit, getting used to the bike was more difficult than I imagined. It takes strength to balance yourself on the bike, and even more so if you add a passenger. But after having the bikes for a couple of weeks, I already feel like I have the hang of it. My students laugh when they see me zipping around campus. Don’t worry, I’m being safe! 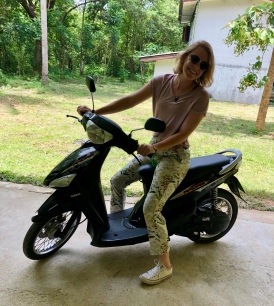 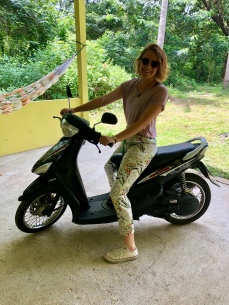 Those of you who know me well will be absolutely shocked to hear that I wanted to name my bike. (I suppose I’m still learning to master the art of conveying sarcasm through writing…) Since the moment we told the rest of the teachers in our office that we wanted to get motorbikes, they have been asking Jenn and I constantly to drive slowly and safely. Like I mentioned, my bike isn’t exactly a speed racer, so it hasn’t been a problem, but it did give me inspiration for my name: Slow ride. Translated to Thai, my bike’s name is Nangcha. Perfect – In Lomkao, we ride slow and we take it easy. Jenn named her bike Jing, which translates to “cool” or “badass”. She said she wanted to think of a badass name to offset the girlish pink. 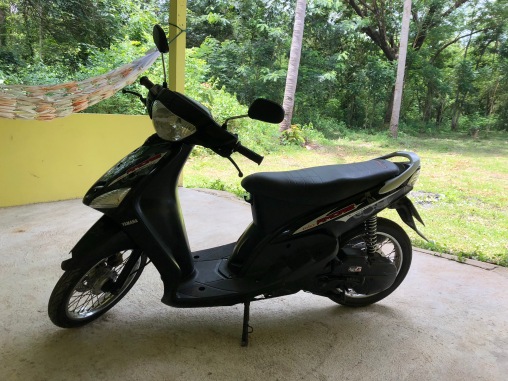 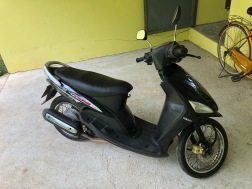 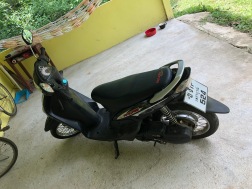 Along with Nangcha and Jing, we have another new family member to announce. Occasionally, some of the many strays who roam Lomkaophittayakhom’s campus venture toward the Banana Cabana. Some even explore our back patio area, but after their food search comes up short, many choose not to stick around. This was not the case with Murphy.

Around the same time that Khao Noi passed away, a small black female cat with patches of white started hanging around the Banana Cabana. To say “hanging around” puts things very lightly. She practically harassed Jenn and I whenever we saw her, loudly crying for food and attention. At first, we ignored her. Though it’s very difficult most of the time for me to refrain from petting, I know that interacting with strays in Thailand can be dangerous. Not only should precaution be taken to prevent contracting diseases, but bites and other injuries are always a possibility.

Despite our hesitation, Murphy was not backing down. She began crying loudly any time she heard us make a noise inside the house. She started doing the obnoxious cat habit of stepping right in front of you when you are trying to walk, tripping you, almost as if to say, “If you won’t pay attention to me, I will force you to.” When we finally started petting her, mostly as a desperate attempt to shut her up, we found the explanation for her persistence: Murphy is pregnant. 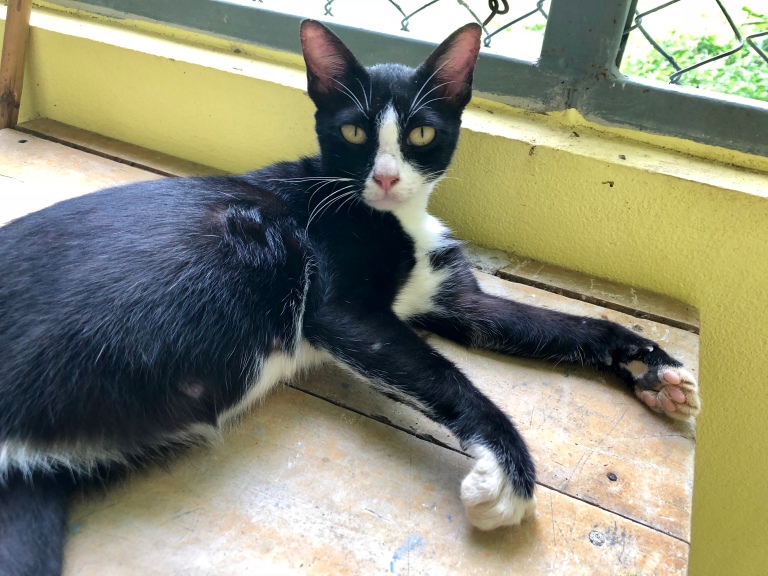 Her presence drew some more attention to the Banana Cabana. Another cat began appearing, who we suspect may be the father of her litter, and a stray dog also started coming around. He is fox-like with burnt orange fur, so we named him Red.

We started putting food out for Murphy and, surprise surprise, she has officially become our cat. She lives on our back patio and cries for her meals three times a day. Spoiled, huh? Initially, we found her extremely annoying and demanding, but we’ve noticed that after being fed, she’s quite friendly. Many times, after a meal, if I’m hanging out on the back patio doing laundry, she’ll plop down by my feet and happily roll around, scratching her back. She’s certainly claimed the back patio as her own territory, though the other animals haven’t stopped coming around. Yesterday, when Jenn got home from school, she found Red in our laundry area attempting to get Murphy’s food. 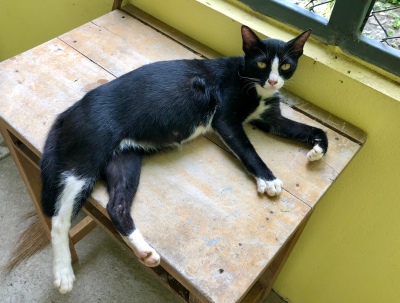 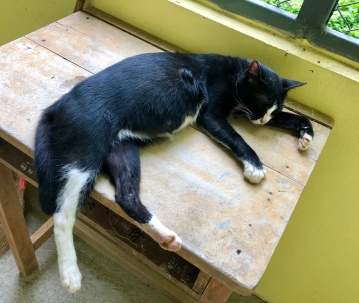 “What did you do?” I asked. “Well, Murphy wasn’t eating it, and I felt bad, so I gave him the rest of her rice.” I’ll keep you updated as to whether or not we have another “pet” on our hands. Meanwhile, we are anxiously awaiting Murphy’s delivery and hoping it goes as smoothly as possible. Soon, we will have a clowder of kittens on our hands!

Between John, Jenn and I, we have a discrepancy regarding Murphy’s…. capabilities, to put it nicely. She’s definitely not the sharpest tool in the shed – her dullness is so severe that John and I suspect she may be blind. Many times, I have come back to the Banana Cabana to find her crying to me for food, only to find that her bowl still has food in it. Once I direct her to the bowl and guide her face down toward the food, she begins eating as though she had been starved all day.

John frequently acts as though he is going to step on her or kick her to test this blindness theory, and Murphy hardly flinches. Despite these seemingly obvious symptoms, Murphy makes sure to act fully capable just often enough to make us unsure of our hypothesis.

Because she is a cat enthusiast, Jenn of course comes to Murphy’s defense whenever we discuss the topic of Murphy’s ineptitude. Jenn insists that the thick-headedness is only a symptom of the pregnancy, and that she is certain Murphy will show her true colors once we officially meet her babies.

We will solve the mystery of Murphy’s stupidity in due time. To be continued.

6 thoughts on “Welcome to the Family”